I haven’t been very exciting since I moved here. No more zipping off to foreign lands on the weekends, just headed to work and rugby practices mostly. I’m happy with both so far; I’ve been making some nice work friends and everyone on my rugby teams are lovely.

Like I mentioned last post, I started playing TAG (flag) rugby and was scooped up by a very good team. We have had a tournament all month and played the past two Saturdays. The games have gone really well; I got two tries last week! (Tries are the rugby equivalent of touchdowns). We have the end of the tournament this Saturday and I’m looking forward to this as I think my team, the Bufaloos, will do really well. I haven’t figured out what a bufaloo is yet though… for my contact (normal rugby) team, the girls all are really nice and have really made an effort to get to know me. It’s so nice and welcoming. I feel a lot like a deer in the headlights though because we play 15s and I’ve only played 7s before. I’m hoping I start catching on soon and stop looking like I don’t know what’s going on. Here’s me being awkward in a group photo after our first two games. 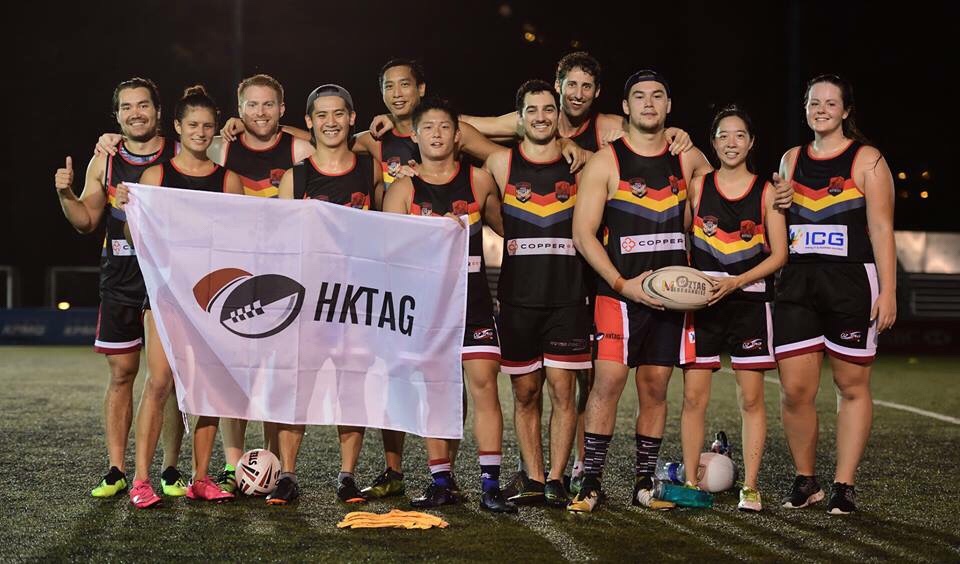 One of my coworkers, Sim, and I went to Peng Chau island over the weekend. It was so nice to have someone whose been here a bit to take the ferry with so I can learn how it works. We had a great time wandering around and finding hidden beaches. I had planned before to go to public pools to catch some sun, but now I’m going to hop a 30 minute ferry and sit on the beach when I’ve got time instead. It was great to have Sim’s company and also awesome she lent her photography skills so I didn’t have to ask strangers. Thanks Sim! We found some of the flowers in the second picture which almost have a flower in a flower, really cool and haven’t seen this kind before. 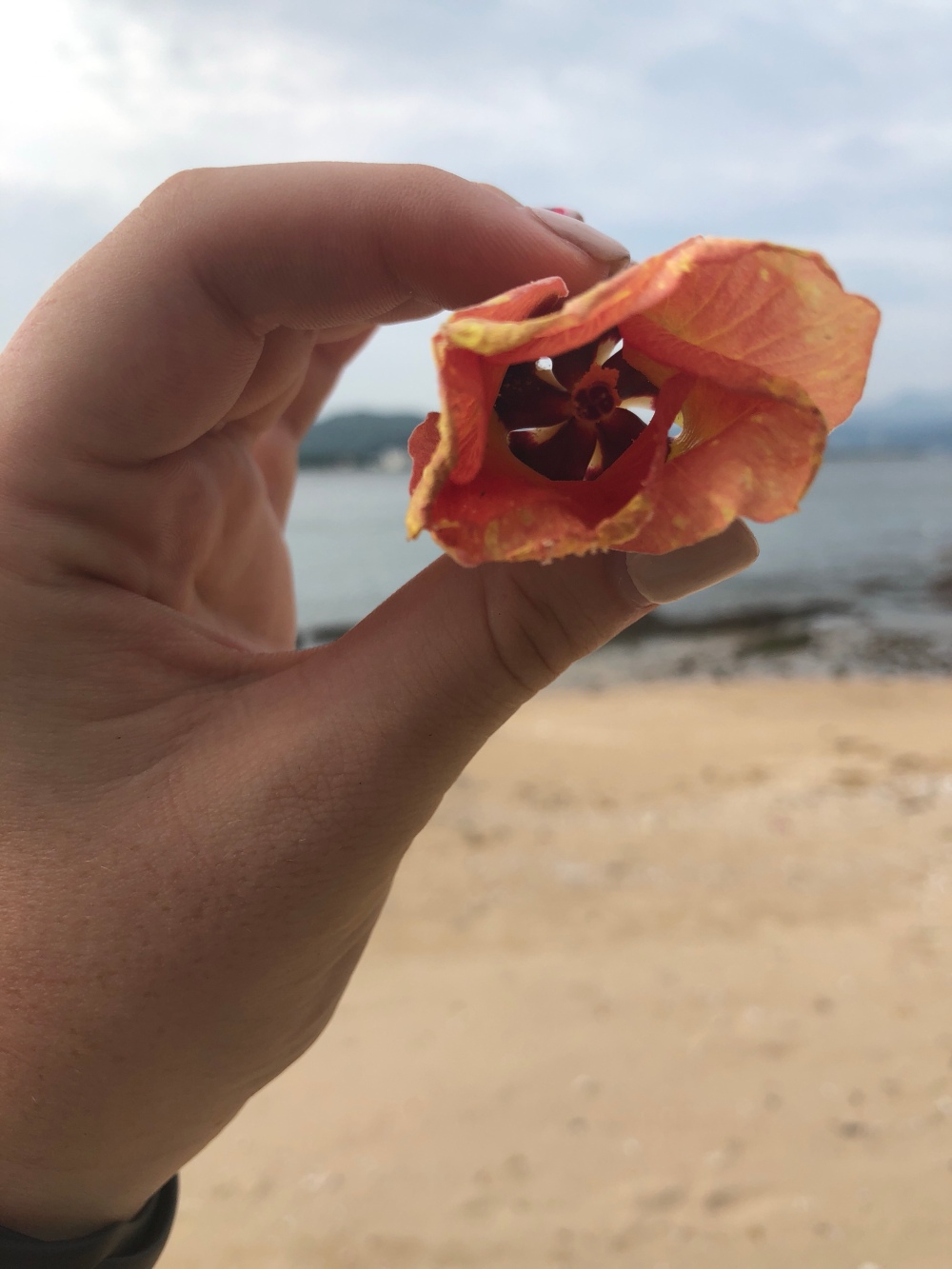 One of the criticisms I’ve heard of Hong Kong is that the beaches aren’t nice. Were the couple we saw Saturday crystal blue and white sand? No, but they were pretty much deserted aside from the one we found that many people brought their dogs to which is always welcome in my opinion. They also have their own charm and are still better than most east coast US beaches.

We followed a path around the half the island and found some fire beaters, the crazy mop looking things below.

Some things look a little prehistoric here. With these big leaves I was hoping to see Littlefoot and friends somewhere, still on the look out for them.

On the way back, the lights were on in the Ferris wheel and I tried my best to capture them. 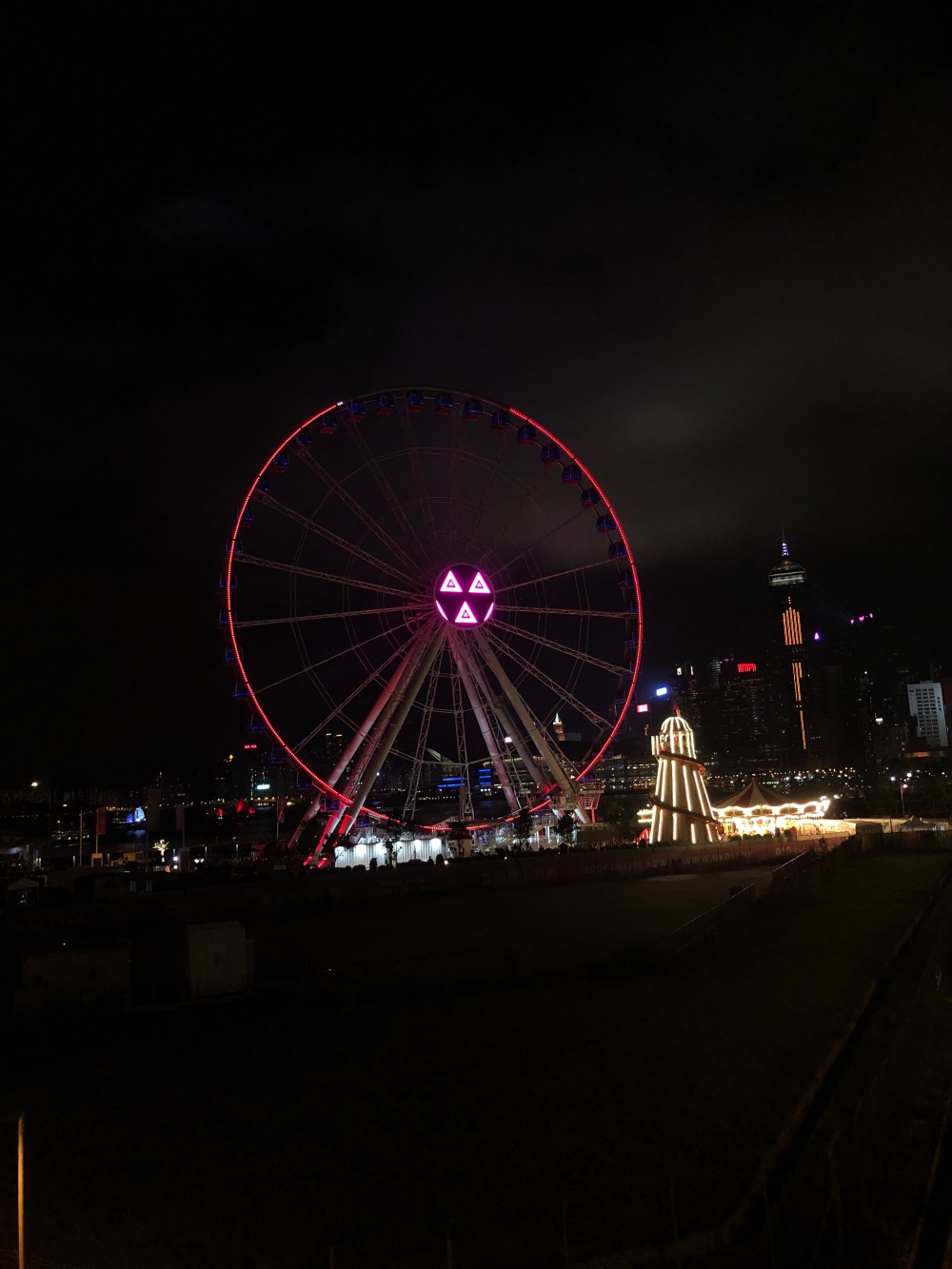 The city scape really is beautiful at night. Many buildings are lit up and it is such a nice sight.

The heat has finally cooled down but we have already had Typhoon 1 warnings and some Amber rainstorms. I don’t know what all of these things mean, but basically it’s been wet. Like really wet. Which sure beats the intense heat when I first got here. However, I’m still struggling with staying hydrated here so I’m hoping I get better at that soon so I can feel my best for work and rugby.

I found an apartment last week in Causeway Bay right near Time Square. I’m not posting any pictures today because it’s currently messy but I am at 200 sq ft which for my price range of studios, is pretty darn good. Everything else I looked at that I could afford was 100 or 120ish. The only downside to mine now is there’s not much of a kitchen area which means I’ve been eating out, sort of pricey, sort of not as long as I pay attention to where I’m eating. The other great thing about my apartment is that I’m super close to both work and rugby now. This means no more crazy jammed public transport!!! At least not on a daily basis.

I’ve looked into Cantonese classes and once I get a few more paychecks into everything, I’m planning to sign up from a local school. The one I’m checking out is a survival class for 900hkd and if I pass the test, I get 40% (or something) if that money back. They also have another level or two I could do once I’ve taken that from them so I’m looking forward to starting those. Unlike small town Hungary, I don’t need to learn Canto here at all. English gets me by everywhere, I just want to (try) to learn the language. But I’m going from one of the hardest languages to the next, so I don’t think I’ll be a master overnight.

I’m really settling in to work and it’s going very well. I have only one class that’s all mine at the moment but I’ll be getting more next Saturday when the next term starts, it’s summer term now. Currently, we have about 40 teachers in the office (plus admin and cleaning ladies) so we are packed full and I still haven’t learned everyone’s names. It’s very hard because unless someone is training me, I don’t have much opportunity to talk with them. I’m training for phonics classes and 4 levels of other classes so I’m still busy when I’m not doing things for my own right now. It’s a big adjustment from having no curriculum or anything to prepare for my classes last year, but I think it will be good in a different way. I’ve already learned to be spontaneous and creative so now I’m learning how to be structured and thorough. I guess that means in after this one, I should have all the teaching skills, right?

With a lot of challenges that have come up already, I have become more grateful and understanding for everything i experienced in Hungary. I can see now how God was using those things to make me a more go-with-the flow person and it’s already served me well to not have small schedule changes ruin my day. That isn’t the only thing I got out of my experience in Hungary, but it has been the one that’s been repeatedly helpful this early on. I also find myself missing my coworkers and my kids already, I hope this school year goes well for everyone in Szazhalombatta.

One thing that’s been really hard for me so far is the time difference. It’s a full 12 hours from Pennsylvania which means that when I’m awake, everyone at home is sleeping and viceversa. I got into the habit of FaceTiming my mom while I was eating lunch or dinner in Hungary and now it’s not as easy to find a time to talk as I’m just getting up and she’s headed to bed. I’m sure it’ll get easier as a routine settles in for me. It really is difficult not having a routine and that’s something I’ve noticed that’s extremely hard to feel happy with a move until I’m settled into a routine.

This weekend, I’ve got the final round of my TAG rugby tournament like I’ve mentioned and Sim and I are going to another island. I will write another post about these next week. I might also clean my room and post a picture of it next time as well.