Prague – the first trip of many in 2018. I challenged myself on this trip not to take out any local currency- I just really did not want to deal with yet another different money or the atm fees. I successfully used a credit card for everything and am very happy not to have some more leftover currency to join the shekels, lieu, etc. that I have in a jar in my apartment. I left Friday after school to go to the airport for the short hour flight. It was my first time with Ryanair and while I was expecting it to be terrible from all the horrors I’ve heard about them, I don’t have any complaints.

I got in and took and uber to my Airbnb. I have to say, the first time paying for anything in another place is usually a bit of a panic and until I check the currency conversion. 370 looks horrible right?? it was less than $20. 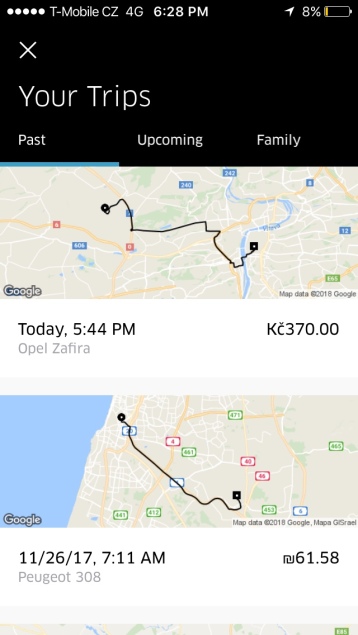 I met the host of my Airbnb, Irena, and I highly recommend her place. She was beyond nice and the room was cheap, clean, and central. here’s the link to Irena’s place if you need somewhere to stay in Prague.

Friday night I walked around old town a bit and had dinner at Restaurant Zvonice. It was a really cool restaurant inside an old bell tower. While it was a really cool experience, I wasn’t wowed by the food that in my opinion was over priced. I had heard a lot of good things about it but was just disappointed. Pictured is sauerkraut soup which was just really bland and wild board roast while was good but just not as good as what I had in Italy. 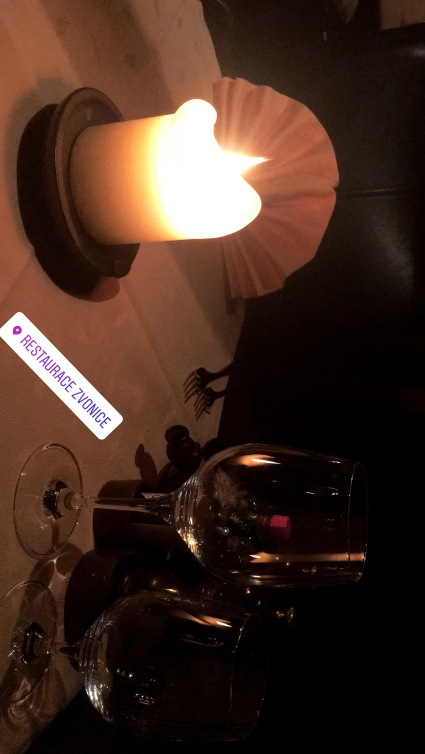 Saturday I walked around old town, saw the dancing house, Wenceslaus square, and took a free walking tour.  Unfortunately, the astronomical clock tower that is one of the big attractions was under renovation. 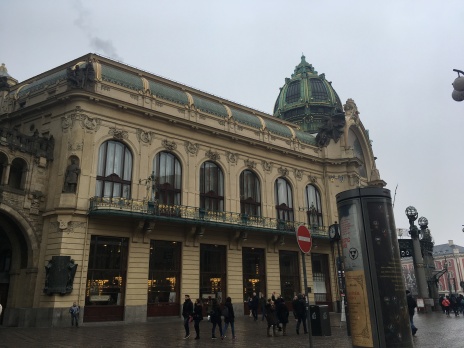 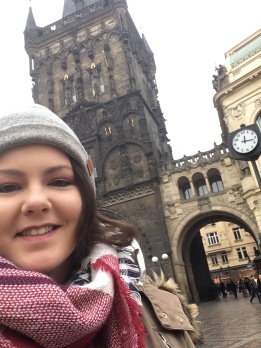 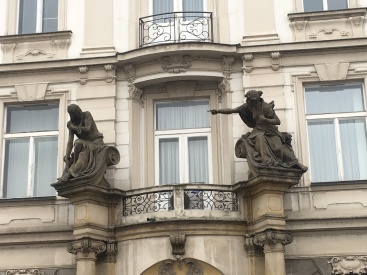 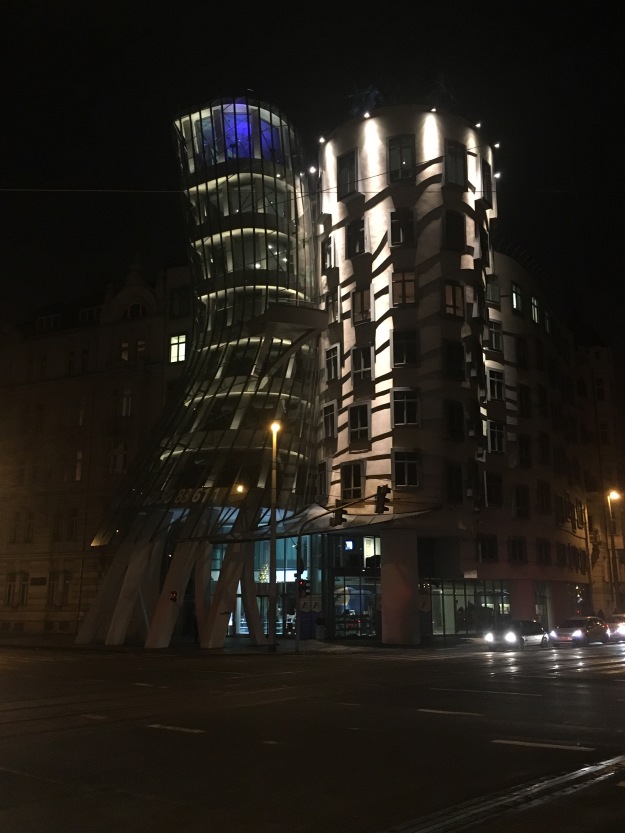 Also included in Saturday was breakfast at Sisters Bistro which have a variety of open faced sandwiches. The open sandwiches are common in Prague and they were okay but nothing special. It had a really hipster feel to me which I’m not about. but the coffee was good so it all worked out. While waiting for the free walking tour, I had a beer flight at Fat Cat Brewery. I would highly recommend this, even though it’s a bit of a tourist restaurant. Everyone who has ever drank with me knows I will never order a beer. The beer gustation flight is the first time I have ever enjoyed drinking beer. I would drink any of those again, even the really dark ones. the middle picture is from a small restaurant whose name I’ve forgotten. the meal was pretty forgettable as well, but the dumplings (yes those are dumplings) are traditional Czech cuisine and they were good so I was happy to give them a try. They were doughy and not that good on their own but perfect to soak up the juices from the meal. The circle of beer included banana flavor(good) coffee (not good) and a few more typical like wheat. Restaurant service in this part of Europe can only be described as terrible to American standards. Really, it’s awful. When you go to a restaurant you seat yourself, the waiter comes (eventually) and takes your order, and after another 5 hours you get your food, they never come ask if your food is okay or if you need anything, and then they take your dishes and ask if you’re having a coffee or dessert. The waiter/ess will never ask if you’re ready for your check. I would never dine and dash but waiting over 40 minutes to ask for my check on occasion has certainly made me consider it once or twice. Dinner in Europe can be a several hour affair and they won’t rush you out the door. However, at Pivovarsky dum, they did just that. I ordered my beers around 10:20 and at 10:45 they brought me the check and said they were closing even though they were supposed to open until 11:30. It was absolutely the most ridiculous thing I’ve had happen to me over here, not to mention I didn’t like half the beers in the flight. 0/10 don’t recommend. 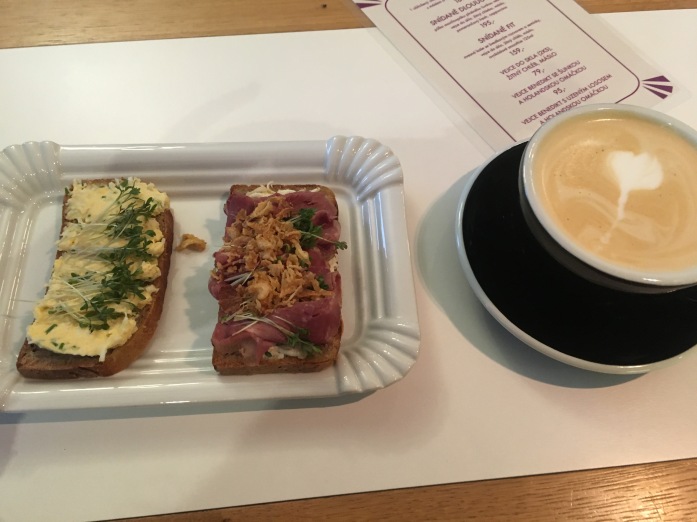 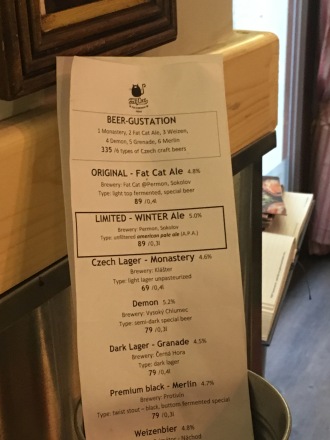 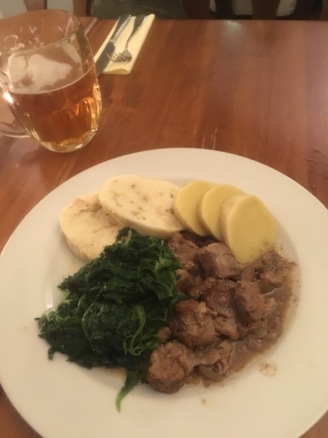 Below is pictures of random buildings that I really liked or thought seemed like the picture of Europe I always have in my mind. some of the buildings had a really interesting pattern painted (?) on them and I thought it was so beautiful. the bridge in a couple of the pictures is the Charles Bridge. The graffiti is John Lennon wall and was really cool, and extremely crowded. My usual trick of offering to take someone else’s picture in exchange for them taking mine really failed here for some reason and I’m just glad I found someone who was willing to take a couple. and I even got to practice some Spanish while I was at it. When I finally finished the long, sweaty walk up to Prague castle, I accidentally arrived at the same time as the changing of the guard ceremony, 12:00. it was sort of interesting but mostly weird and stiff. Also included are a few pictures from the view at the top and pictures of the church next to the castle. I didn’t go in here because I heard it’s really disappointing inside so I decided to save some money on this one. I was really impressed with Charles Bridge and the view off to either side was nice as well. The couple statue pictures are just a few of the many to be seen on the bridge. 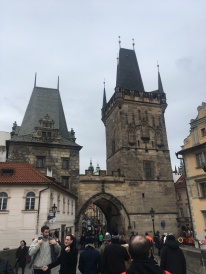 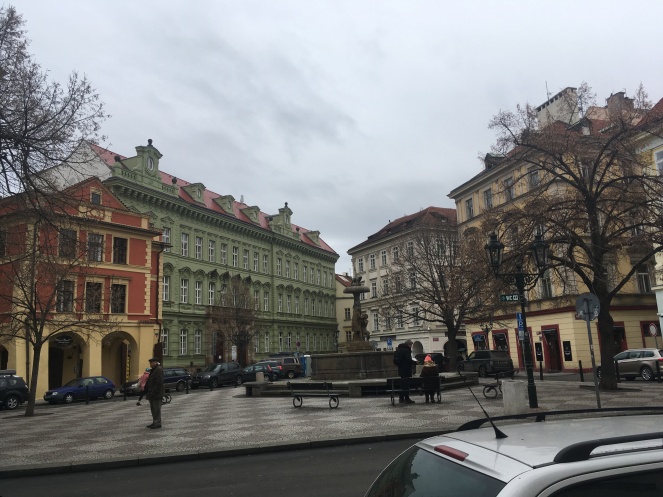 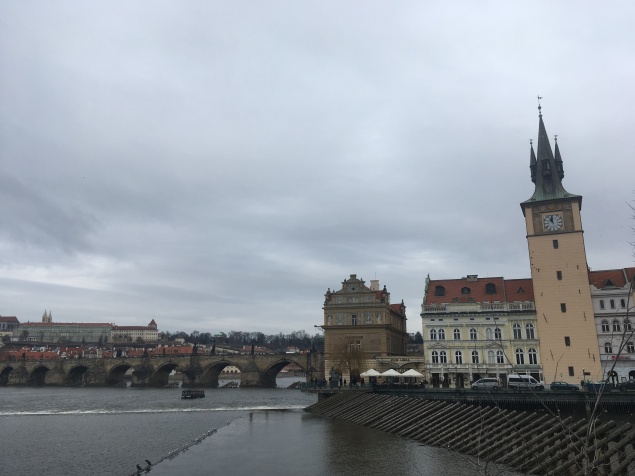 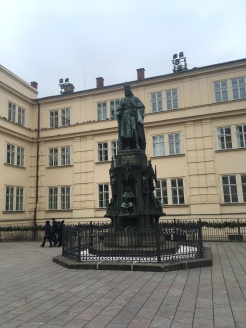 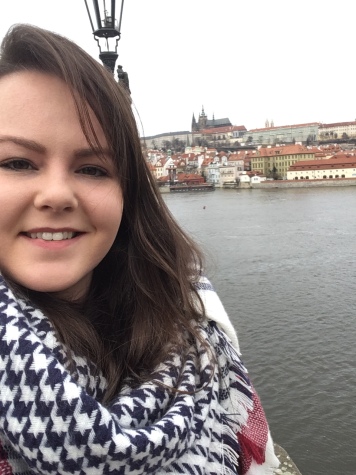 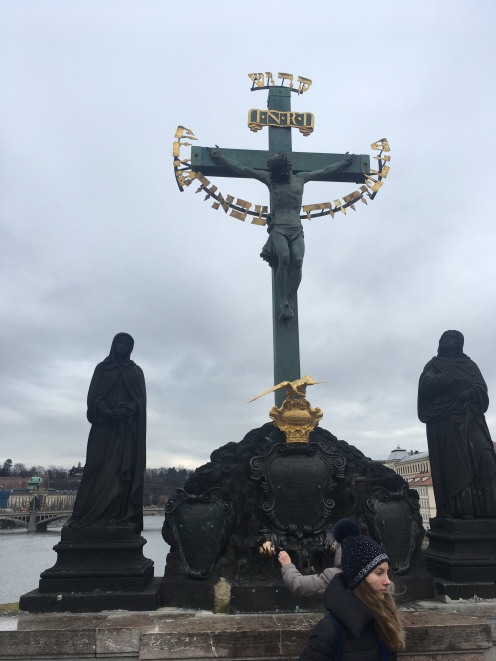 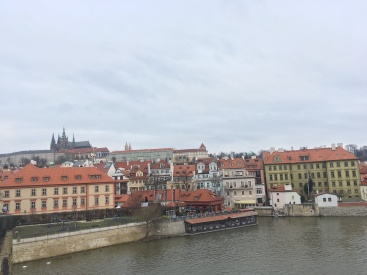 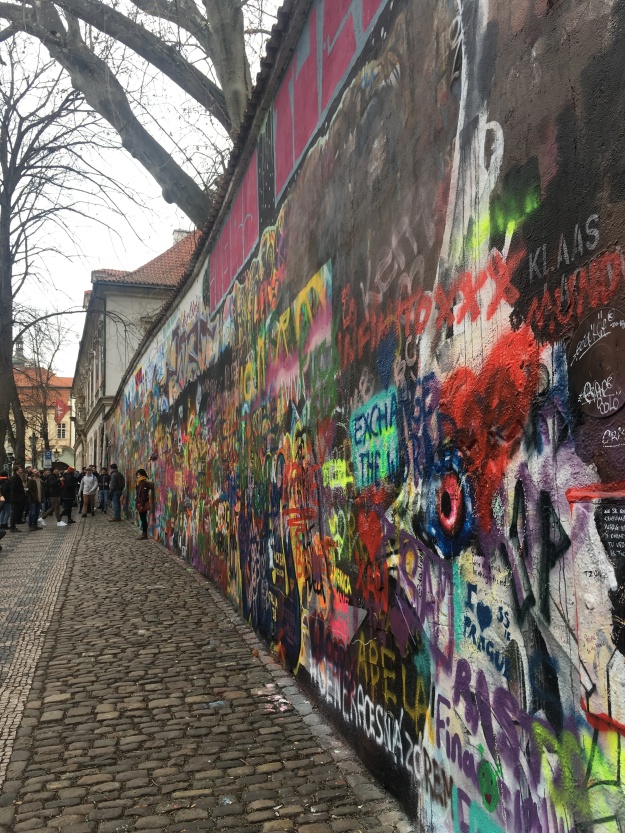 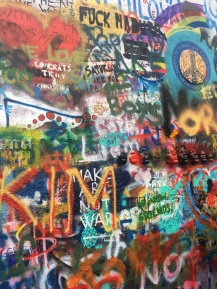 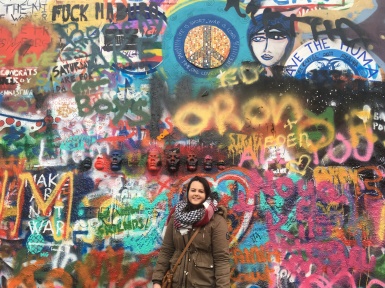 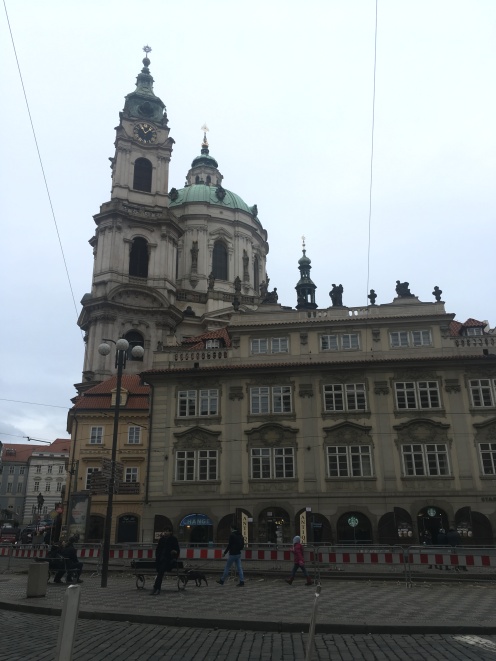 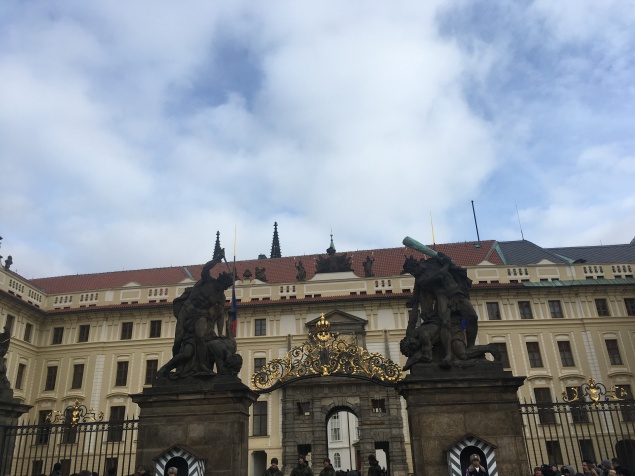 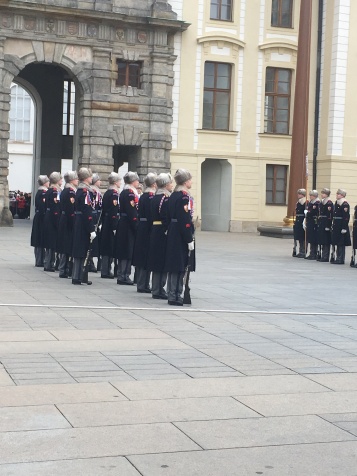 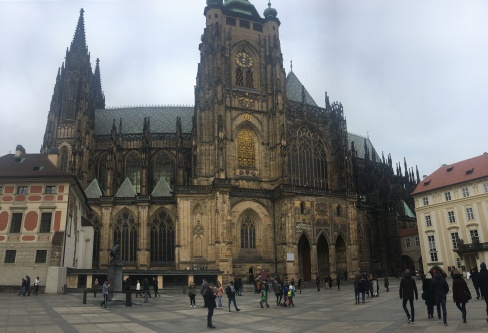 I had no idea but apparently Prague is the Amsterdam of the east in addition to being the the “Heart of Europe”. I was really surprised to see all of the small shops with bongs and everything else. There was a bunch of people standing conspicuously around in some of the squares at night and I’m sure they would’ve had some “special tobacco” really overpriced for tourists if I’d been interested. Weed isn’t technically legal but the laws are pretty loose for position and the general attitude to marijuana is relaxed here.

if you’re planning a trip to Prague I greatly recommend to you this website. It has tons of information about all kinds of things and was super helpful.

I have moved to Szazhalombatta. it’s been two week today since the move. Last week I just observed classes which was a nice break and also helped me get to know a few groups better and gave me some new ideas to use in the class. I now teach 22 classes a week and only see three classes twice. Between 10-20 kids a class, I’d guess I see somewhere around 300 kids a week now. It’s quite a change from the about 100 I saw before. Luckily, all the kids seem great. I think I have about half the names down at this point and my goal for myself is to learn them all, hopefully in a month I will feel pretty good about this. I’ve spent all this week just doing get to know you things with my classes and asking them what they know about America as I now have three culture classes also. Some of the things the kids have said to me this week “When I think of America I think of a bald eagle with M4s as legs swooping down on people” “teacher, do you like cake?” “Scarlettnini, subscribe to my youtube channel” “so do you know what memes are? What about this meme? OMG you know it?? you’re the best teacher ever!” “Why are Kansas and Arkansas not pronounced the same?!?!” and from the littles “Have you seen the minion movie?” “do you like sweets?” And I also had them guess my age when they asked how old I am. I got everything from 18-35.  I’ve also learned lots of cool things about my students like one girls brother lives in Peru and owns a llama and some of the kids are you tubers and some have Instagram pages for their dogs. We bonded over liking some of the same Netflix shows. I really really like these kids a lot and while I’ve already identified who is going to be my problem classes, I’m really excited about them all. Ive already had approximately 50 hugs from the littles and a few of the classes have told their other English teachers that my lesson was good. This is always good to hear but especially great since I felt like a couple of them really flopped this week. The kids English level is also really good.

My old coworker Gabi gave me a pillow case with a picture of each of the classes we taught together. 1-4th graders here and I’m so happy with this memory of these kids.

My new coworkers are fantastic. I can think of 7 people off the top of my head who speak excellent English, and there are many more I can’t think of right now. Everyone is beyond nice. The second day I was there the headmistress invited me to join her for lunch even though she doesn’t speak much English and it was just so nice. Everyone is very thoughtful, my coworkers speak English when I’m in the room even though it’d be easier for them to speak Hungarian of course. My apartment was missing some things when I got here and everyone has been pitching in to make sure I have what I need. I’m now a 30 minute train ride from Budapest and have even gone in on a couple school nights. I’m extremely happy here, way more than I was letting myself hope to be. I’ve found a rugby team to play on and I plan to start going on Tuesday – for anyone who doesn’t know, I’ve been wanting to play since high school. I was beyond ready to call it quits and go home but I’m so happy I didn’t do that.

I’m fortunate enough to have tomorrow off as there’s end of the semester grading going on and I don’t have to be there for it. So since I have a three day weekend, I’m going to Malmo and Copenhagen. After this weekend, I’ll be at an even 20 countries. I’m really surprised how quickly that number has increased since I’ve gotten to Hungary. When I moved here, I had a goal of seeing 30 countries by the time I turn 30. I’ll add at least 5 more countries before May is over and there’s still a few more long weekends left in the school year also. I need to choose a new goal but I’m not sure what’s a good target now. I’ll be thinking it over as I reach closer to 30.

After many months and great pains, I have FINALLY finished my TEFL certificate. I’m now officially qualified to teach ESL, despite the fact that I’ve been doing so for months. So thankful that is over and I never have to talk to that company again.

for now, learn Hungarian – here’s one that absolutely stumped me. book – könyv I am absolutely not able to pronounce that one. Have google translate it for you and listen a couple times and see if you think you can do it.