This weekend was very busy and went by much too fast. After my post Friday, my school had a special sport day. The kids didn’t have lesson for two hours and instead played, volleyball, basketball, and soccer in rotations by grade. They also tried out Kung Fu and another game that I can’t remember the name of. It has a racket and a ball partly filled with sand. The point of it is to not let the ball drop while doing a bunch of fancy tricks. One of my students told me he’s really good at it and has won many competitions. To me, it seems like a grown up version of “don’t let the ball hit the ground” – you know, the game we all used to play at birthday parties with a balloon. I got to try it as well and found it really hard, but not necessarily that interesting.

Friday, my 4th graders were very, very bad. I finished the class by making them sit there in absolute silence for the final ten minutes because I couldn’t take the noise any longer. Hopefully I can find a way to reign them in soon. I’ve tried a lot of different things but they really hated this one so maybe they’ll be better next week… maybe.

After school, I quickly left to catch the bus to in turn catch the train. I for once found the transfers not-stressful, yay repetition. However, about 30 minutes from Budapest my train stopped at a station and it was taking a long time. About five minutes in I thought: ” wow this is strange” ten minutes in: “huh I wonder what’s going on” thirty minutes in: “well these guys with flashlights checking out the train don’t look like a good sign” The train sat there so long that the Hungarians got up and smoked next to the bathrooms. And the lights went half off which had something to do with the power and the door that separated the smokers from the seat area stopped working and made a horrendous noise while attempting to close. So the car became very cold from the outside air and soon extremely smelly from the bathroom air having a way in. About an hour in, a pregnant woman came back into the car from where the smokers were sobbing. Really, nothing is unsettling like not knowing what’s going on, people crying, and bad smells when the train is packed. It’s not a fun combination. Not to mention, I forgot my phone charger and at this point was on 15%. The conductor made a second announcement and I finally decided to ask the woman across from me what was going on. Me; ” hi, umm do you speak any English?” other lady: *shakes her head and looks displeased* Me: *puts my headphones back on and tries not to be embarrassed* To my surprised, within two minutes, that woman handed me herself and on the other end was her daughter who said “Hi, my mom wants me to tell you that the lights will eventually go back on and we don’t know why the train isn’t moving but it will we just don’t know when.” Really, I couldn’t believe the woman was that nice to call her daughter to translate for me. I must’ve looked awfully worried. finally when my phone died and I started panicking about how I would ever find the hotel I was splitting with other teachers for the weekend, I picked up my phone and my portable charger and turned to the girl next to me to ask if she had one. I said a few words but mostly pointed at my phone and the charger and she replied in perfect English that she could let me use her cord. Why she didn’t say something when I asked the other woman if she could speak English, I still don’t know. But I was able to charge my phone up and find my hotel/Laura and Kenny after the 3 hour delay.

Saturday, I met a teacher who just arrived a week ago which worked out perfect as she was in Budapest for the weekend as well but actually is living about 20 minutes by car from me. Jena and I explored much of Budapest, both intentionally and not, and also met up with a few other teachers Saturday evening for Ashley’s birthday party. It was a pretty good day despite my phone’s reputedly stupid directions. I’m sure I’d spend a good amount of time lost if I actually lived in Budapest. Thankfully today my maps worked really well to get to donut shop I wanted to snag breakfast at on the way to the train station.

It seems like no matter how hard I try, public transport and I are not meant to be friends. In Hungary, people under the age of 26 get a 33% discount off their train tickets from Friday about noon until midnight Sunday. When I got the Budapest station, I only had a few minutes before my train and approached the ticket counter. I told the lady I was sorry that I didn’t speak Hungarian (in Hungarian) and then said which train I wanted and asked for the discount I get. She checked two different forms of ID and took so long doing so, I missed the train I wanted to take. And she still wouldn’t give my discount although she didn’t feel inclined to say why. This is particularly annoying as the bus from next to the train station only goes to Nyirpazony about 3 times on Sundays. luckily, the train she did put me on arrived in time for the bus I wanted to catch. Unluckily, the bus didn’t show up. I had been asking Viktor to double check bus times and when I told him this and asked for advice, he and his mom drove over to pick me up. While I hate that there’s not much to do here, I couldn’t ask for better people. There’s so many genuinely kind people in my town and I think that’s a fair trade. another example of this is one day at school, I asked my coteachers where I could buy stamps to use as rewards for the kids. One gave me the stamp sitting on her desk and the other showed up to school the next day with 12 different stamps for me even though they both told me where I could find them myself. I love the stamps almost as much as the kids do.

weird things: igen is the word for yes nem is the word for no, and when people say yes, they don’t just say yes. they say “igen, igen, igen igen igen” with quite a few head nods in there as well. They super agree. But when saying no, they just say nem once. So I guess it’s not that polite to disagree as strongly as one agrees. there are trash cans everywhere along the road, but there’s hardly ever trash bags. Why not just put a trash bag in there so someone doesn’t have to wear gloves to empty I’ll never understand. Every single classroom has a sink. every one. there’s no water fountains so the kids both wash their hands there and get drinks out of the faucet. And they’re always asking me to wash their hands if they write on the board. I guess they’re not a fan of chalk. When I ate breakfast Saturday, this man gave me back 500 forint in coins instead of a single paper ft. He couldn’t even give me a couple 100 or 200 forint coins. the man gave me 10 and 5 and 20 forint coins. apparently, I made him annoyed somehow because he was also extremely slow serving me – I watched my coffee sit at the bar for quite a few minutes before he decided to bring it to me; I returned his kindness by leaving him couple 5 ft tip. And with that, I still haven’t figured out exactly how much I should tip when it’s not already included in the bill anyway because tipping isn’t expected as much here.

MY CROCKPOT SHOULD BE HERE IN LESS THAN 48 HOURS UNLESS THE MEAN HUNGARIAN CUSTOMS PEOPLE STOP IT OR MAKE ME PAY HUGE TAXES ON IT.  I hope they don’t do that, I’ll be very annoyed about it.

Some of the pictures I already shared on Facebook but these are some of the things Jena and I spent Saturday walking 17.2 miles and 30 flights of stairs seeing. 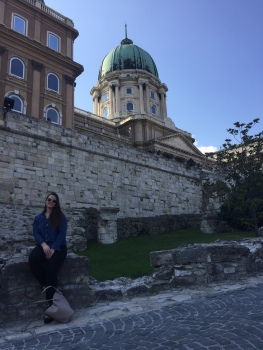 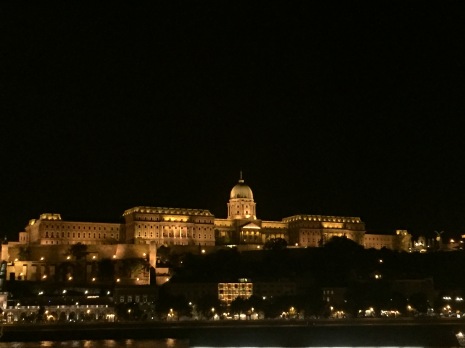 Hungarian lesson: 1,2,3,4, egy, ketto, harom, negy just because these are the only four number I consistently remember.