I want you to imagine with me for a minute. Please try to imagine this scenario: you walk into work and your boss tells you that you will have a very big project. It will take you several months and you must maintain all of your other work on top of it. Your boss gives you one week before you have to start this big project to prepare for it but you really don’t feel like you had enough time to prepare. She did give you the option to say no to the project, but it’s both very important and very important to you. This project is what you’ve been waiting for and it could be essential to further your career if you do it well. So you agreed to the short notice and prepare for the upcoming Monday to start your project. When Monday comes around, you go into work, nervous but excited. You walk to your office and say your usual morning greetings to a few coworkers and they smile and say “hello” back. When you go to talk to your office friends to start telling them about the new project, they stare back at you blankly. You ask them what is going on and they reply with something you don’t understand. It seems like everyone is talking in a coded language but they forget to let you in on it. After a few minutes, one of the women from another department comes over to make copies and you try talking to her to see if she will answer you. She talks to you like each word is new to her and her mouth has to form the words for the first time as she says them. but that doesn’t matter, she can answer you! So she says she doesn’t know why other people are talking to you in code, but as you both are talking, a coworker who speaks in code interrupts and the two of them talk in the unintelligible sounds for a few minutes. When they are finished, the nice lady goes back about her business because she forgot she was explaining something to you. Discouraged, you try to start your project because that’s all you came to do. But you need something from the IT department and the guy there will only speak in code. and you need the person’s help in the office next to you, but she just smiles and nods when you go to ask her for what you need. So you sit at your desk for a while and google everything you can think of, switching back and forth between the answers to your questions and any possible keys to the code. Eventually, someone comes over with a packet of instant coffee and does hand gestures until you figure out they’re asking if you would like one to have one. So you have a cup of coffee in silence and return to your work, hoping this inability to communicate isn’t here to stay and that you will be able to complete your very important project.

I hope this analogy helps you to understand what my life is like. It’s not exactly like this, but this is as relatable as I could make it to every day life. Really, there’s lots of smiles, lots of mixing of language, lots of asking if I want coffee, and lots of googling on my part.  This week was very very hard. I think I told my mom this is the worst day yet every day. I really questioned what I was doing here and thought really hard about whether or not I thought I could do my job. Yesterday, after talking to Judit and realizing she didn’t know some of the things I was having problems with, I feel much better. I think that the hard days are far from over but now I know that sometimes I just need to tell her what’s going on and things will at least feel easier. Last week when Judit dropped me off at the train station to go to Budapest, she told me “please write a message when you find your friends.” I replied “okay mom.” I am really thankful for her and that I was lucky enough for her to be my contact person. She is really amazing and caring. Judit is helpful and always makes sure anything I need is done.

Things that made this week hard:

Tomorrow is Derek and Rachel’s wedding and while I’m so, so happy for my very good friends, I’m really sad I won’t be there. I wish there was a way I could’ve put off coming just for three weeks to be there. But that isn’t the case and I have to settle for pictures. At home, I worked caring for people with disabilities for the past year and then some. I really cared for my clients and have often called them “my kids” in casual conversation. They all have different needs and some require more care than others. The four people I worked most closely with are all fairly intensive care. I took care of one woman every other week for months and she’s very small so I picked her up to move her from her bed to her wheelchair etc. Essentially, she is cared for like a baby and out of all of the people I cared for, specifically this woman felt very much like my kid when I took care of her. Tuesday, I woke up to a text that said she died Monday night. It’s really hard not to be able to be with my past coworkers this week. I swept the tile floors of my home yesterday and today a bunch of ants showed up on my counter and I don’t know why. I kill them all and every time I come home, more show up. I do not like this. Somehow, I had gotten the wrong times for all of the periods written down and showed up halfway through classes most of the week. This is finally solved now and I also think the schedule is finished. Most of the other things that were challenging this week aren’t new things and some of them are things I expected. but the things I expected are so much more than I thought they would be. like I knew I would be tired but I didn’t know I would be THIS tired. I knew I would be confused but I didn’t know I would be THIS confused. It’s really hard not to understand how things work or what I should do about this or that. I don’t know what I should teach and no one will tell me what they are doing when they see the kids so I can’t prepare for my next lesson. I teach PE with teachers that only speak Hungarian and the kids are at low levels so they don’t understand me. I’m on the search for games for PE that will be easy to mime and don’t have a lot of rules. But I also have the impression that maybe PE is supposed to be more of a workout here than fun like at home. It’s really hard to plan when I don’t know what’s expected. I spent most of the week sick and thought it was my allergies until this morning and was pretty sick today. I don’t understand how to teach 3rd graders by myself when they don’t have enough language to understand me. Yesterday Judit asked if my wifi worked, I said yes because yesterday it worked. Today, it did not. ugh. seems to describe the bigger picture of my life.

The good new is that after I told Judit about the problem kids, they apologized to me in the next class and were much better behaved. Even though I don’t have my insurance card yet, the doctor still was willing to see me and I was in and out of the office in about 15 minutes and went next door to the pharmacy and got medicine right away and got to leave school early (no Sarah Beth, I don’t have some weird Hungarian disease, abort panic mode). When I told Judit I wasn’t feel well this morning, Csilla gave me the cutest pot of honey to help me feel better. So nice and it really helped my throat. I think Winnie the Pooh would greatly approve of this. I also hate honey at home but the stuff I had today was pretty good. I tried Head, Shoulders, Knees, and Toes with the 3rd grade today during PE and they loved it. I always do a regular speed, a super slow speed, and a super fast speed. They think it’s absolutely incredible and I think it won me lots of fans. I also found two more versus of the song that teach more body parts so I’m excited to see how well all the grades do with those words as well.

I really intended to take some pictures of the classrooms today, but sort of got sidetracked because I am sick. Will try to think about it for the next post. It occurred to me that while I have shown the containers get my lunch in, I don’t think I have ever shown my lunch. so there’s a picture of that today. the ball things in the soup were sort of like fried dough even though they look like chickpease. I don’t like the cabbage stuff they serve every few days but everything else is pretty good.  Weird things about lunch this week: one day, one of my three containers were empty. I can’t figure out why they still gave it to me. Wednesday, soup was the main course but they still gave me soup for an appetizer. Secretly I am really grateful to always have a soup appetizer because I appreciated it so much while I felt sick all week, but I still don’t know why anyone would want soup with a side of soup. Granted, it was two different soups but I still think one soup is enough for the day. I went for a bike ride around most of my town and maybe a surrounding town yesterday. I really like the area but some things are unusual. people in the middle of town grow a few rows of corn or apples or grapes if they want to. their yard is hardly big enough to but that doesn’t stop them. And there are no warning about dead end streets. they just simply end.The grave yard is very well kept and I haven’t noticed a grave without at least one bunch of flowers on it but it’s common to see two on each grave. I’d take a picture but I feel very disrespectful doing that so just trust me that the cemetery is pretty or google and see what the cemeteries look like here. I also discovered another place around me that sells produce and a small restaurant. score. 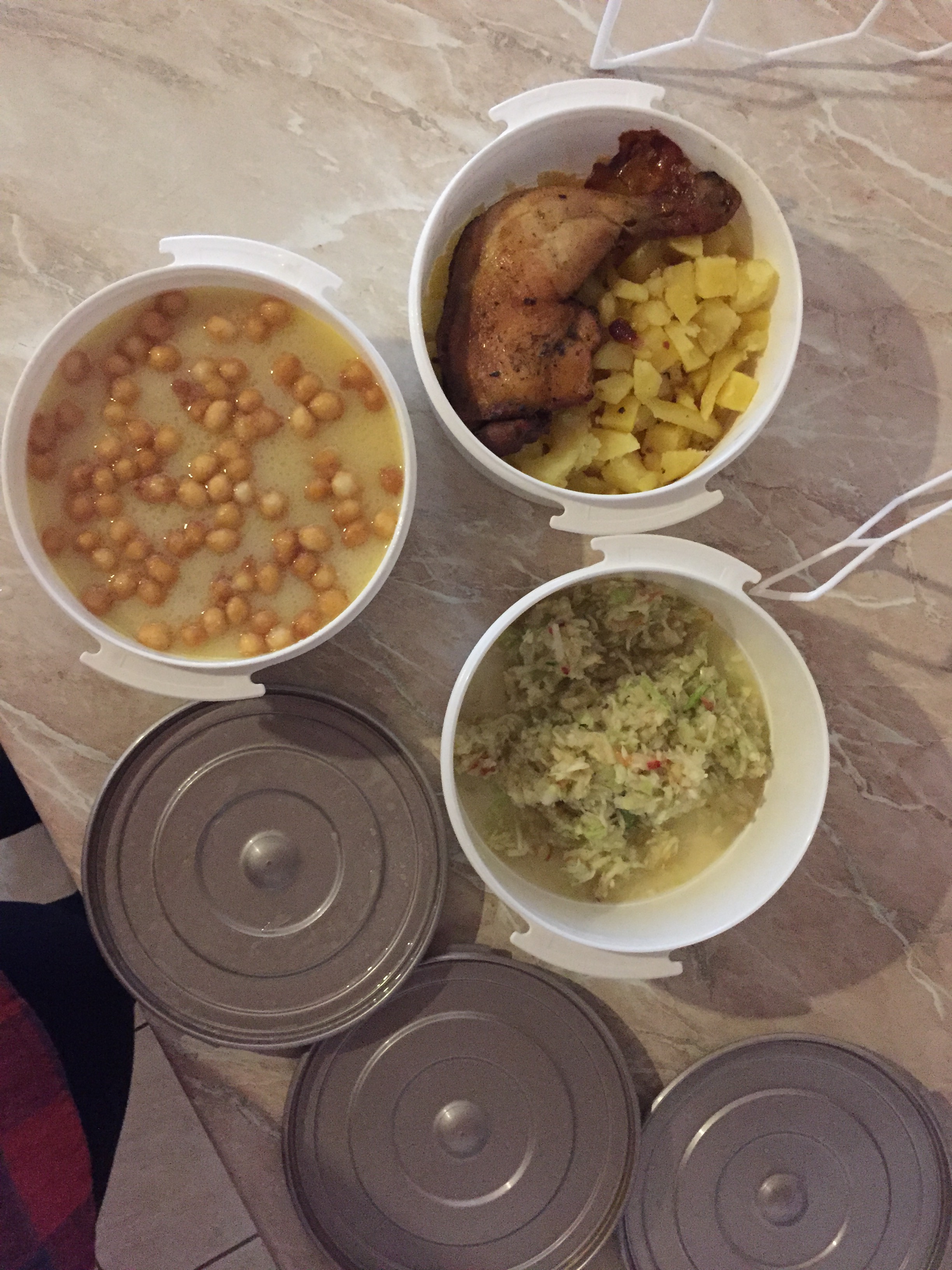 For now, I am happy this week is over and that I have the excuse of being sick to do nothing because that was completely my plan anyway. I have been working on my Hungarian and here is the word of the day (or post, or week, or whenever I feel like doing it): Boscanat nem tudok magyarul – I’m sorry I don’t speak Hungarian well (I may have forgotten the appropriate accents on this phrase).